(John Waters hanging out in Danny Fields’ NYC apartment in 1973)

About two years ago, I was bartending at B-Side bar in Alphabet City and my pal Colin came in for a beer. I asked him what he’s been up to and he proudly exclaimed, “I hitchhiked from here to California and back!”

He told me that everyone was really cool that picked him up, but he brought a girl along for extra security. I told him that I wanted to go with him next time. Then I had a great idea. “What if we hitchhiked from New York to Baltimore and found John Waters’ house and interviewed him!”

I thought Mr. Waters would surely be proud of our crazy ambition and grant us the time. We could also tape record every conversation with the people that picked us up and write a story to submit to a magazine. Colin agreed to be in on my scheme.

A week later, I was reading some online gossip and saw that John Waters was hitchhiking at that very moment to write a book about his experiences! If that isn’t kismet than i don’t know what is! So when Carsick came out, I was eager to read about John’s adventures.

John’s mission was to hitchhike from his Baltimore, Maryland home to his San Francisco, California abode. As I finished the first few stories of Carsick, I encountered John getting picked up by a sweet drug dealer who gives him millions of dollars in cash to fund his next movie, a middle aged pro-choicer with a anti-abortionist locked in the trunk, and a sexy demolition derby driver named Lucas who asks John to jerk him off while he’s crashing into other hot rods at the destructive competition. 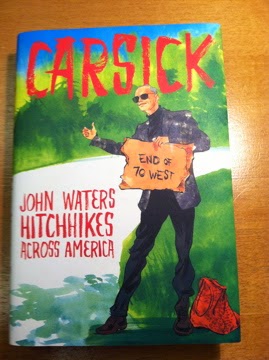 At this point, I got angry. How dare Waters think that his readers are naive enough to believe these liberal fairy tales! He obviously just collected the book advance and stayed home! Hrrumph!

I actually got out a highlighter and started coloring in the funniest lines. Such as:

“I remember when Divine first saw Richard Simmons and confessed that he felt homophobic.”

“Dogs don’t want to be home with their owners stuck in some sort of sick S&M relationship, sentenced to a life of caresses!”

“Also, I hate to tell you this, but can’t you see? Your cat hates you.”

“I refuse to look into the face of space rape, so I close my eyes. The rubbery appendage turns me around and begins to unzip my zipper. What the hell, I think; you’ve never been fucked by an extraterrestrial before, go for it.”

“I chuckle to myself, remembering Quentin Tarantino’s hilarious line onstage when I interviewed him for the Provincetown Film Festival. “What was the best thing about your success?” I had asked, and he answered, “Pussy….  no, the memory of pussy.”

I’m amazed by the vile, buckets of spew and degradation that seem to dribble out of Waters’ genius brain. You are happily stunned at the edge he leads you to and then he pushes you off the cliff. It just gets crazier and more extreme. Like the hippie who is so green that he offers up his urine as a thirst quencher which John unknowingly drinks.  Or the deranged serial killer who targets cult movie directors. Waters’ stumbles over the mutilated bodies of George Romero and Alejandro Jodorowsky , among others, while the killer’s crooked, nasty cock shoots a load of infected semen into his eyes right before beheading Waters. He goes up to heaven for a second where God whispers, “Catholics were right”,  then he proceeds to plunge down to hell to watch ‘It’s A Wonderful Life’ on loop for eternity.

The fantasy is always more interesting than the reality. Whether you are day dreaming about your new love interest being your soul mate or imagining building your second house on a remote island after winning the lottery. And as expected, it’s the same in these stories. Waters gets picked up mainly by sweet, hard-working, middle class gentlemen who love their wives dearly.  Not exactly fodder for a sex addled, drug fueled, puke friendly, over-the-top shocking John Waters book.

A very funny and entertaining read. I can’t wait for someone to make a movie about it. All the fiction elements are brilliant but the reality of the situation was pretty mundane. Bad food, empty landscapes, motels, obesity, and lonely truckers. Sometimes he would be stranded for nine hours waiting for a ride. It was interesting to notice how many Americans did not know who John Waters. Even when he would throw out his movie titles, only one person remembered him as a Simpsons character and another had heard of the movie Hairspray but wasn’t incredibly impressed. This must have been quite a humbling trip.  Luckily, all his rides were caring people who now have a great conversation starter tucked away in their memory rolodex.

PleaseKillMe.com is the home of Please Kill Me: the Uncensored Oral History of Punk, and other books & projects by bestselling authors Legs McNeil and Gillian McCain. The site encompasses music, art, culture, fashion, poetry and movies - from the 60s through today. THIS IS WHAT'S COOL!

THE DEATH OF SGT. CARTER

SHOOTING STIV BATORS AND LORDS OF THE NEW CHURCH

Things You Should Know #4: BRIAN ENO

Please Kill Me: The Uncensored Oral History of Punk – AUTOGRAPHED

Order your copy of the number one best-selling Punk book of all time! Alternately praised as shocking, lurid, insolent, funny, rowdy and brilliant, there's a reason this book is a classic... and you can only buy the autographed 20th Anniversary Edition book at PleaseKillMe.com!

CAROL KAYE: THE BOSS OF THE BASS GUITAR

Carol Kaye started as a jazz solo guitarist, working the club scene of 1950s LA, when she was asked to work on some studio tracks for Sam Cooke. Though she loved the bebop jazz scene, Carol was a single mother with three kids and so to the studios she went, eventually switching to bass. She ultimately changed the very sound and role of that instrument in pop music as a member of what drummer Hal Blaine dubbed The Wrecking Crew (but which Carol has called The Clique). By any name, these were the session musicians who shaped some of the biggest hits of the 1960s, after which she went back to playing live gigs and working in movies and television, writing and teaching, which she is still doing in her 80s. Michael Shelley talks with the amazing Carol Kaye for PKM. Read more!

PUNK MAY BE DEAD, BUT LEGS MCNEIL SURE ISN’T