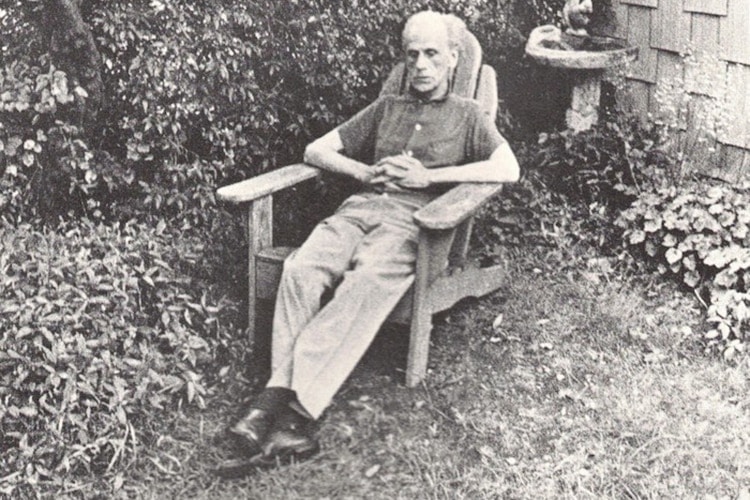 Artist, filmmaker and writer Joseph Cornell (1903-1972) was a mystery when he was alive and continues to mystify fifty years after his death. Best known as the “box artist,” he made assemblages that defy categorization but seem to resonate with viewers of all ages. He lived for decades in virtual anonymity in a working-class neighborhood in Flushing, Queens, creating his celestial masterpieces in a modest home on Utopia Parkway. Cornell was born in December and died in December. The approaching winter season, with its shorter days, seems like the perfect time to warm ourselves next to his legacy.

For some reason, Joseph Cornell, Nick Drake and Franz Kafka hang together inside my head. Creators of sublimely beautiful and timeless work in three distinct disciplines (art, music, literature, respectively), they remained nearly invisible in their own lives. Even those who knew them well were often at a loss for words when trying to describe them. None of the three men ever married and they all lived and died, for the most part, in or near the family home where they were raised. And, of course, the work they left behind grows in stature with each passing decade.

Drake’s and Kafka’s stories have been widely told in recent years and their works continue to engage and inspire. But Joseph Cornell (1903-1972) still remains a mystery. As one of his acquaintances noted, in Deborah Solomon’s Utopia Parkway: The Life and Work of Joseph Cornell, “He was weighed down by his dreams and visions and you could see that his life wasn’t easy. I always had the feeling that if I shook him, he would pulverize into dust, like old paper.”

Though his life was fairly simple, it indeed “wasn’t easy.” For nearly 40 years—until their deaths left him completely alone—Cornell resided with his mother and his severely disabled brother in a modest home on a quiet Flushing, Queens side street known as Utopia Parkway. By pure and delicious happenstance, that street’s name evokes the unattainable perfection Cornell longed for, dreamed about and ultimately sublimated into his remarkable artwork—those hand-made, painted boxes and assemblages filled with montages of wire, marbles, colored sand, miniature wine glasses, clay pipes, maps of the heavens, photos of old film, dance and opera stars.

What is it about these boxes that so deeply touches viewers? Is it the strangeness of the imagined landscapes Cornell created, the odd but seamless, almost alchemical juxtaposition of disparate 2-D and 3-D objects? The sense of lost or irretrievable worlds? The abject loneliness and possible abandonment they present? Whatever it is, interest in Cornell and his work has continued unabated since his quiet death at age 69 in that Utopia Parkway home just after Christmas in 1972. His box assemblages have not only inspired other artists, but writers and musicians, too. Jonathan Safran-Foer compiled A Convergence of Birds (2001), a collection of poetry and stories inspired by Cornell’s boxes. The main character in Anne Tyler’s novel, Celestial Navigation, is a reclusive artist modeled on Cornell.

Cornell’s art was the inspiration for the single “Soap Bubble Box,” a minor hit in Europe. It was written and recorded by the Dutch band, the Nits, after seeing some of Cornell’s box assemblages in MoMA.

Underscoring and serving as a stark contrast to his transcendent art was, as noted above, the seemingly suffocating life he led, partly by circumstances, partly by choice. He took care of his invalid brother Robert—whom he loved and doted upon like a child—and acquiesced to his strong-willed mother, all while working a series of underpaid jobs in the garment trade and volunteering to keep the books at his local Church of Christian Science. His idea of a wild time was going out for pistachio ice cream or some gooey pastries—his only vice seems to have been sweets—and wandering dreamily through city parks and streets. He never dated, though he had secret lifelong fantasy crushes on ballerinas and film actresses (he was particularly smitten with Hedy Lamarr and Marlene Dietrich). He never learned to drive a car, though he tirelessly scavenged among the flea markets, second-hand shops and dime stores of Manhattan. He never learned to properly operate a movie camera, though he led a secret life as an avant-garde filmmaker and one of the world’s most avid collectors of vintage silent movies.

Among his best-known experimental films was Rose Hobart (1936), a silent film that Cornell fashioned from rearranged clips from the 1931 film East of Borneo (1931). Cornell would screen this film through a pane of blue glass while playing songs from an album he bought at a thrift shop, Nestor Amaral’s Holiday in Brazil.

The experience of watching this film at the Julien Levy Gallery in New York  apparently pushed the grandstanding Surrealist Salvador Dali off the deep end. Halfway through the screening, Dali became so unnerved by the experience that he shoved the projector over and angrily accused Cornell of stealing his own film technique.

Being lumped in with the surrealists, Cornell was friendly, if not quite friends, with Andre Breton, Max Ernst and Matta, as well as with modernists like Robert Motherwell, Cecil Beaton, Parker Tyler and Charles Henri Ford (the latter two affiliated with View magazine, which published some of Cornell’s enigmatic writings). Of all the major art figures around New York City during Cornell’s perambulations, he was closest with Marcel Duchamp, who called him “Jo-Jo.” Cornell would shyly drop in on the genial Frenchman on numerous occasions. Still, this thin wraith-like man, this maker of magical montages and shadow boxes, was ultimately a mystery to all of them.

Most startling of all, despite all these connections to the higher echelons of the art world, Cornell did not actively try to sell his work, even when it would have alleviated his financial burdens and obligations and even though his mother and a steady stream of visiting dealers alternately begged and harangued him to part with his precious boxes. He hid his art away, perhaps because it was too much a part of him to send out into the world.

Deborah Solomon, in Utopia Parkway: The Life and Work of Joseph Cornell, makes the case that this most elusive and reluctant artist was not unlike Emily Dickinson, the hermitic poet from Amherst about whom Cornell was also  obsessed and for whom he made one of his many homage masterpieces, the haunting box “Toward the Blue Peninsula.” Perhaps because his enigmatic style was developed in the crushing vacuum of his uneventful life, Cornell not only remained untouched by art trends during his lifetime, but his art has subsequently become as influential as any created in the 20th century.

The Midnight Party: A silent film begun in 1938 by Joseph Cornell, completed by Lawrence Jordan, 1968:

This is not to say that Cornell was completely overlooked in his lifetime. On the contrary, the Guggenheim museum, an early haven for modernist art dating back to the 1930s, mounted a retrospective of Cornell’s work in 1967. The show brought him wider critical acceptance and some new fans, if not collectors, even a 12-page spread in Life magazine, entitled “The Enigmatic Bachelor of Utopia Parkway.” But the interest in Cornell seemed driven by his mysterious presence…or non-presence more than his art. As Solomon writes, “Journalists who were well aware of the bravura antics of Picasso and Jackson Pollock were astonished to meet Cornell, who seemed so passive they wondered how he got out of bed in the morning.”

After the Life magazine story, which Cornell called a “monstrosity,” he retreated more and more into his private universe. He wasn’t a recluse, per se, but he became more wary of curators and journalists. He was, on the other hand, sought out by many young artists smitten by his boxes, attention that he appeared to love. He enjoyed the young, unjudgmental company and the purity of young people’s reactions to his box assemblages, as opposed to what he called the “arid” deconstructions of art critics and curators.

The Clientele, a band from the UK, wrote the song “Joseph Cornell” in homage to the artist. It sounds like a Robyn Hitchcock outtake (that’s a compliment):