They came not to bury punk but to praise it. 20 years ago, Legs McNeil and Gillian McCain published “Please Kill Me: The Uncensored Oral History of Punk” with Grove Press. The format was ingenious — no single person could lay claim to know the whole of the sprawling, anarchically creative, drug-riddled scene.
Home
All Please Kill Me Posts

BY CAROLYN KELLOGG VIA L.A. TIMES 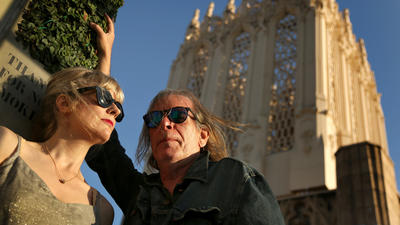 They came not to bury punk but to praise it. 20 years ago, Legs McNeil and Gillian McCain published “Please Kill Me: The Uncensored Oral History of Punk” with Grove Press. The format was ingenious — no single person could lay claim to know the whole of the sprawling, anarchically creative, drug-riddled scene.

Not even McNeil, Punk Magazine’s “resident punk” from its founding in 1976 through its 1979 end, who couldn’t bring himself to write a memoir. “I thought, how boring,” he says. “My story?” It took the help of McCain, a friend, fellow lover of oral histories and patient co-conspirator, to make the project come together.

“Please Kill Me,” five years in the making, was important not just because it made visible the genealogy of an underground music scene (the Velvet Underground to the New York Dolls to the Stooges to Television, Blondie and the Ramones) but because it showed how brilliantly an oral history could capture culture. Previously, histories like it had been rare — McNeil and McCain were primarily inspired by “Edie” by Jean Stein, edited by George Plimpton — but now they’re everywhere, with “Freaks and Geeks,” the March on Washington and lobster rolls getting the oral history treatment.

I sat down with McCain and McNeil in downtown L.A. —  at the Ace Hotel, where Michael Des Barres hosted their Aug. 1 reading for an audience that included Blondie’s Clem Burke — to talk about the project as part of our occasional Collaborators series. Although they are not a couple (McCain is married to music writer James Marshall), they frequently finish each others’ sentences. The conversation has been edited for length and clarity.