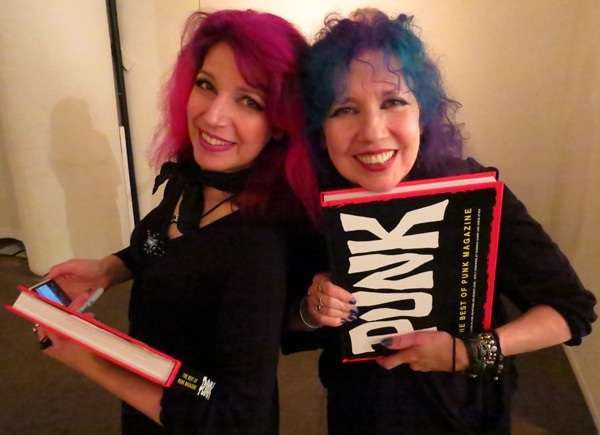 Tish and Snooky from Manic Panic at the Punk Magazine Book Launch Party in Brooklyn. 2013
Home
All Please Kill Me Posts Artist Hal Drellich was an early contributor to Punk. Credited with designing The Monster in Punk #15‘s “Mutant Monster Beach Party“, which was a full-issue Fumetti/Movie starring Debbie Harry and Joey Ramone, written by Legs and directed by Holmstrom. Filmmaker Mary Harron (American Psycho, I Shot Andy Warhol, The Notorious Bettie Page) was also signing books. You can read about her early escapades working with Punk Magazine in Please Kill Me, and in this article by Legs.

Tish and Snooky Bellomo from Manic Panic.  These punk fashion pioneer sisters took a little store on St. Marks Place and turned it into an internationally renowned hair color and cosmetics company. They were early advertisers in Punk and also had roles in Mutant Monster Beach Party. Danny Fields and filmmaker Brendan Toller. Brendan is currently working on Danny Says, a documentary on the life and times of Danny Fields. Mickey Leigh, longtime friend of Punk Magazine, was on hand to congratulate John.